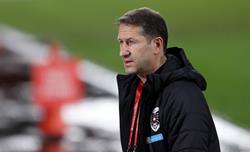 Austria coach Franco Foda has urged his players to make history in their Euro 2020 opener against tournament debutants North Macedonia.

The Austrians are preparing for their third European Championship campaign but have yet to taste victory in the competition.

They qualified for Euro 2008 as hosts and later travelled to Euro 2016, picking up just a solitary point on each occasion as they exited following the group stages.

German boss Foda, whose players were unable to train at the National Arena in Bucharest on the eve of their Group C opener after heavy rain caused a waterlogged pitch, is targeting a milestone moment followed by a maiden appearance in the knockout rounds.

“I don’t feel any pressure; on the contrary, I told everyone, the players, the coaches and staff that we can make history tomorrow,” he told a press conference.

“That’s our goal: to win our first Euro game and then we can see how things develop and what further goals we can define.

“The atmosphere is very good in the squad, there’s a lot of excitement. We’ve had to wait a year for this because of the pandemic.

“We have set a very clear goal. The group is very evenly balanced, everything is possible. Especially in a Euro like this, anything can happen. We want to do everything we can to reach the knockouts.”

North Macedonia are also seeking a maiden Euros victory, albeit in their first outing at the finals.

Austria won home and away against their opponents during qualifying for the tournament but North Macedonia coach Igor Angelovski believes his side will be a tougher proposition on this occasion.

“I think that many things have changed since those two matches, because they were played two years ago,” he said.

“And during those two years our national team has grown from one match to the next and played better football, the players have made progress in each match, and this is completely different from the qualifiers.”