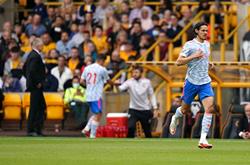 Edinson Cavani back in contention for Manchester United against Aston Villa

Manchester United striker Edinson Cavani is back in the squad for Saturday’s Premier League clash with Aston Villa.

The 34-year-old Uruguay international has not played since the end of August because of a muscle strain, but has returned to training and is in contention for Villa’s trip to Old Trafford.

Manager Ole Gunnar Solskjaer made 11 changes for the Carabao Cup third round defeat by West Ham in midweek – defender Alex Telles made his first appearance of the season – and his big names are likely to return, although striker Marcus Rashford (shoulder) and midfielder Amad (thigh) are still out.

Aston Villa’s Leon Bailey is sidelined for a number of weeks with a quad problem.

The forward injured himself scoring in Saturday’s 3-0 win over Everton and is out until after October’s international break.